Of course, for the first severe weather day of the year, I'd be at work.  Couldn't it have happened on my day off?  It was a Thursday and I was due to report.  I had spent the previous day on a couple of convective investigations (report here) and the setup was even better as the dynamics reached the area.

The Storm Prediction Center had the Western Slope under a slight risk for the day.  By late morning, a mesoscale discussion (#1446) had been issued.  A severe thunderstorm watch (#576) soon followed.  If I recall correctly, I had a quick report to take care of in the morning and then had convinced my news director to let me chase.

As storms began to erupt over eastern Utah, Drew Wilkins accompanied me west in the news car.  A particularly severe storm was already to our northwest, so we drove north on highway 139 to get closer.  It was moving pretty quickly and I knew we wouldn't be able to get ahead of it, but I also knew that it was dumping hail.  As soon as we started to get close to Douglas Pass, the roadside was covered in hail.

We drove all the way to the top of the pass where the hail had dropped the air temperature into the low 40s.  (It was in the 80s in the valley).  Snow plows were out on the road, clearing the hail and the small debris flows which had managed to make it across the highway. Here's a shot of the storm on radar (click for a larger view)

I would have liked to follow the storm farther, but we were limited by time, so we began to head back.  Once we got back out into the desert and had mobile reception, I got the first radar scan in about an hour and a half.  A nice cell was developing right over the city and there we were out in the desert.  We made haste to it and it had a nice, strong base; probably the most robust storm base I have seen on the Western Slope. 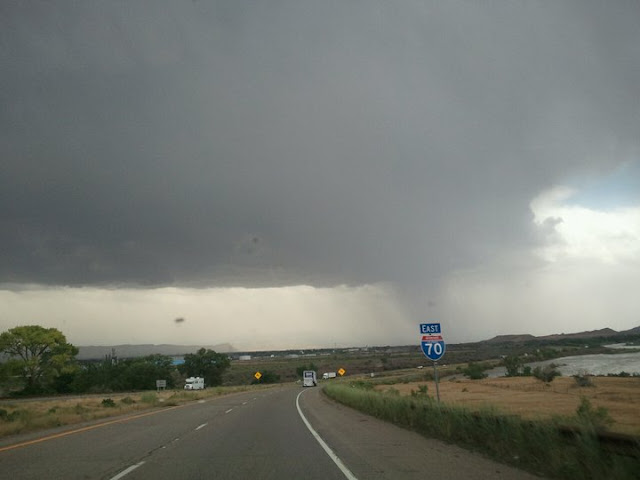 It was moving rapidly and dumped some hail and heavy rain over the city before moving up onto the Book Cliffs.  We gave up the chase and headed back to the station as I had to be back and have everything put together for the 5PM news.  All in all, I felt very lucky that I could go do the thing I love most in the world during a normal work day.  Not many are so lucky!  Granted, the weather out here is tame compared to the plains, but this was a big deal for us.

Here's the quick report that we put together (it contains some of the video we took):
http://www.kjct8.com/news/28425446/detail.html

As an aside, it was awesome to take Drew storm chasing.  He got to experience the "hailshred" for the first time, which I was also excited about. 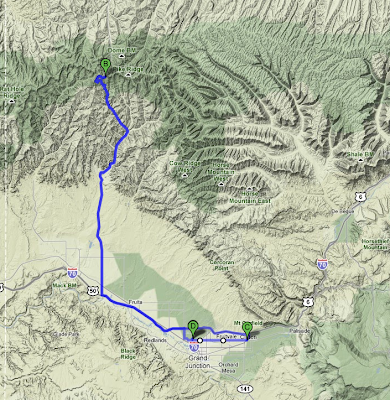