Haven't had much time to go through video and photos, but put something up on Youtube last night. We were just west of Meeker, OK on US 62. We were southbound on Oklahoma 18, north of Meeker and came out of some precip to see a nice wall cloud illuminated by the last light of day off to our southwest. We intercepted the wall cloud, along 62 with some ragged lowerings. In the video, you can see this. The wind was light out of the SW at the time and the "feature" was just to our NE.

I called scud at the time, though have been wavering thinking it more based on our location on the radar (we did not have radar with us on the chase ... just on my phone, which is low on detail), and also based on using the progress bar to speed the video up. Slight rotation can be seen. The only certainty was that it was a pocket of rapidly ascending air under the wall.

What do you think? 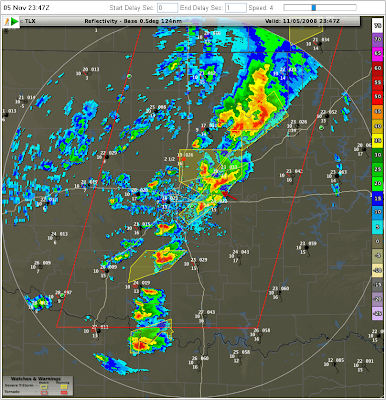 UPDATE:
Here is a screen cap from earlier video of the wall cloud (before we basically drove under it). 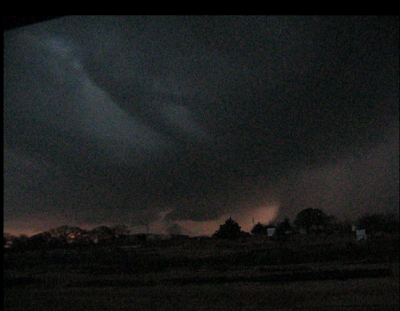 Just a few more jules of cape or a boundary in the area and that could've been a tornado. Has that 'look' to it! Nice stuff.

yea cool seeing you too. Yea we got into some major HP hailcore action. Tennis balls and 75MPH winds. WOOOO!!! lol

Officially, i'd say it was a "scunnel" lol jk, having fun with your descriptive though maybe? Oh and thanks for the compliment on my little score :)

Paul: Scunnel works for me.