I'm not going to lie. I sometimes have difficulties with self control. I suppose a part of me fantasized about maybe intercepting a storm or two on the way back to Colorado. However, as the morning that I planned to leave Montana rolled around, it soon became apparent that the chances of severe weather were actually really decent. SPC seemed to agree (it's not often that you see a 5% tornado risk in the MOUNTAINS of Montana).

As my time for departure neared, there wasn't a cloud in thy sky anywhere in Western Montana. I got anxious and spent a good deal of time debating the situation, counseling with my cousin to whom I was responsible for driving home on that day. The ever-agreeable Brian was of course on board for storm chasing if that's what the day called for.

I realized that I had only seen my grandmother once on the trip so I figured it would be a good idea to see her for lunch. So, along with my parents and cousin, I had lunch at Mackenzie River Pizza Co. and watched the storms blow up around us. The explosive cumulus development was impressive to all parties including my parents who remarked about the intensity of the storm. As we finished lunch, I watched an updraft over the city begin to lower before ascending Rampart Mountain on the northwest side of the city.

It was time to go.

Road options are not easy in Montana and I didn't want to get too far away from the route home, so after fueling up, I elected to take I-90 east over Homestake Pass. The storms were moving to the northeast and unfortunately, nothing developed south of my line. I knew the best chance of tornadoes would be some place between Great Falls, Helena, and Lewistown, so I made my target right in the middle, that being White Sulphur Springs.

As we approached my north option (US 287), a supercell northwest of Helena went tornado-warned. Unfortunately, I was completely out of position to intercept. By the time we reached Townsend, a nice storm was beginning to take shape over the southern portions of Canyon Ferry Lake (Reservoir). In fact, I found a nice vantage point and got a shot of a sweet meso: 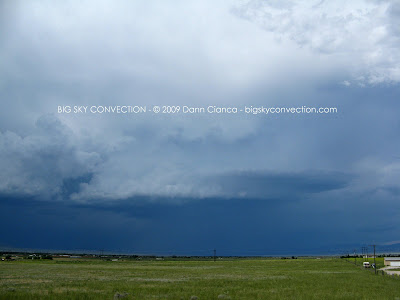 I wanted to stay ahead of the storm, fearing I'd lose it due to road options and actually get an intercept, so we headed up into the Big Belt Mountains on US 12 where I lost data for more than a half hour. By the time we emerged into the next valley, I saw that the storm had basically stalled and been overtaken by the fast-moving shortwave squall. There was more convection popping in the mountains in the vicinity and the best tornado parameters were still near Lewistown, so we kept on, ahead of the storms.

After passing the Castle Mountains and fueling up in Harlowtown, we were northbound on US 191 and headed for Judith Gap (between the Little Belt Mountains and the Big Snowy Mountains). The western sky became increasingly dark as the storms approached and on radar (when I finally got a scan again as I had lost it outside of WSS), it had all become one linear mess. Already through the gap, there was no real point in turning back. I figured we could at least core the line on US 191 or possibly at the junction with US 87.

As the line moved out of the Little Belt Mountains, a nice shelf cloud began to set up. We stopped briefly for pictures and then again for a good deal longer as the outflow passed by. 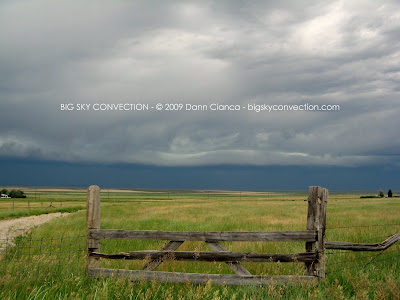 And from our second stop ... 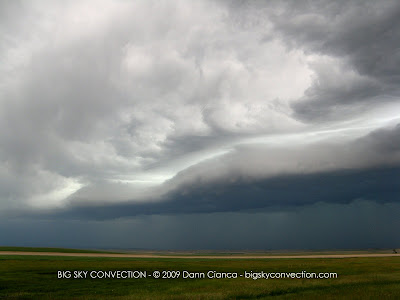 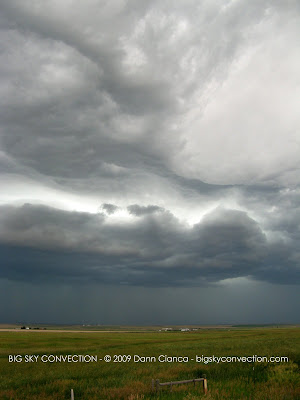 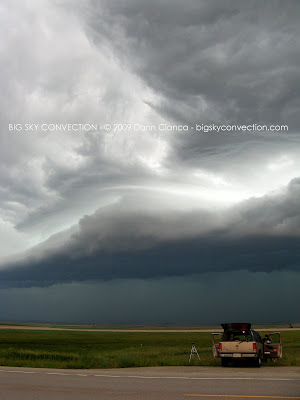 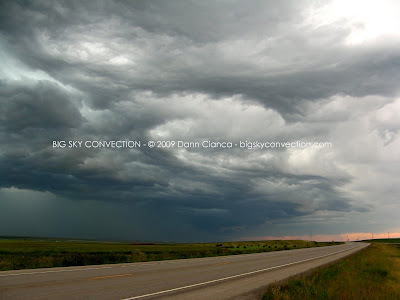 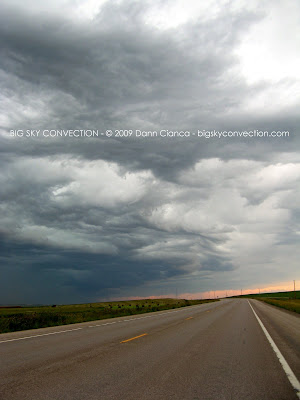 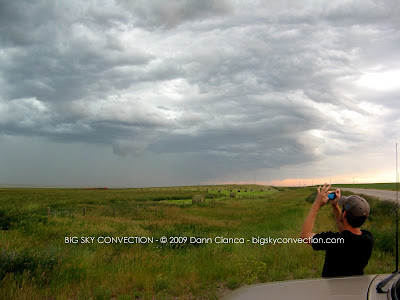 Brian takes a picture of a bit of a lowering in a kink in the line.

The line passed without much incident; basically only a wind shift. The CG's were impressive but I was mainly focused on the shelfy outflow structure. I wanted to get back ahead of the line, so we continued north and then east on US 87. Though there wasn't much precipiation at this advanced portion of the line, there was a lot of dust beginning to get kicked up. I tried to get ahead but unfortunately was hampered by road construction. 87 was compltely dug up and we were on dirt for a good length of time.

We soon found ourselves a good ten miles behind the outflow line and just west of Lewistown. I noticed some interesting structure to our north, so I pulled off and had a look. It was a very strange, laminar feature which appeared to be rotating in place. It was very cool to see the clouds racing overhead while this feature stayed completely stationary to our northwest. I'm still not exactly sure what to think of it ... 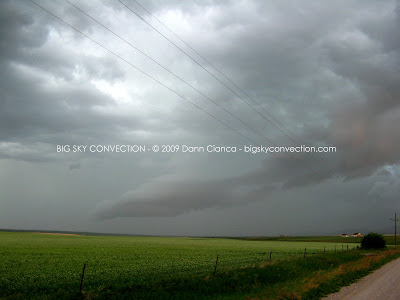 I was actually able to intercept the feature on dirt roads and sat under it for a while as it slowly dissipated. I do have some video but that will have to wait until later. Anyway, we returned to US 87 and saw some more interesting structure over the Little Moccasin Mountains. The coloring was gorgeous and because of the precipitation, I was unable to break out the tripod and had to settle from a hand-held low-light shot. Damn, I wish I would have tripodded it ... I think it would have been stunning. 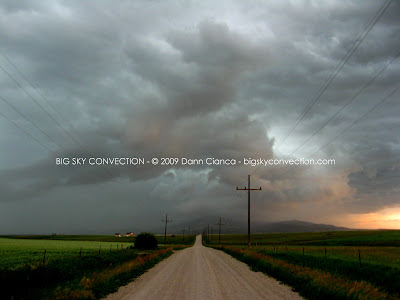 Back on US 87, we were in heavy precip and the leading edge of the line was becoming distant ... 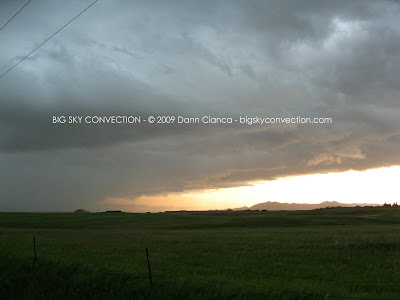 We drove through Lewistown and up into the Judith Mountains where we encountered some strong wind and heavy precip, but no hail. On straight roads in the flat eventually, I hoped to catch up to the edge, but by the time we reached the south option at Grass Range, we were just behind it. At this point, I was pretty much determined to leave the storms behind and begin the trip to Denver ... it was early evening and we still had ten hours to go.

We did encounter a very strong storm north of Roundup. The wind was absolutely insane and completely perpendicular to the road. I would estimate it at at least 50mph ... hard to say, though. The lightning was fantastic as well. Took some video ...


Anyway, as we approached Billings, there were two cells staggered back to the west (obviously behind the line) ... just found them pretty in the late evening light. 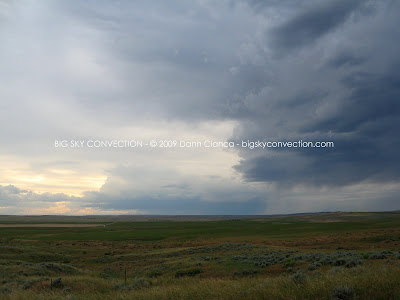 We met my cousin Brad in Billings for dinner and then headed back to Denver, arriving just after 5AM. All in all, it was a long day, but a fantastic home state chase. 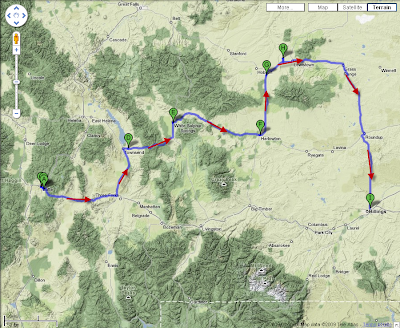 Sounds like a fantastic trip all around. You got some gorgeous photos along the way, really liked the ones from the caverns, the fireworks, all of em!
Nice to see the country down there too, never been to most of those places and now I feel like a drive...

It was a blast, Pat. Can't beat home state chasin'! Thanks for your comments about my other photos too. Hope you're havin' a good one!