I knew severe storms would be possible along my route while driving up to Montana for vacation. I left work around 3PM and got caught in horrible Denver traffic while watching storms fire all around me. My priority at the time was not to chase, but to pick up my cousin and make it to Butte, Montana as early as possible. Chasing would be conditional.

Not soon after I had picked him up in Thornton, I noticed this cell blowing up just to our east. This was one of those days that favored storm split and you can see in the photo below, the updraft is on the north side of this particular storm. It exhibited a lowering for a while before weakening (and becoming less visible) as it traveled to the east. This would have taken me away from my destination, so I continued north. 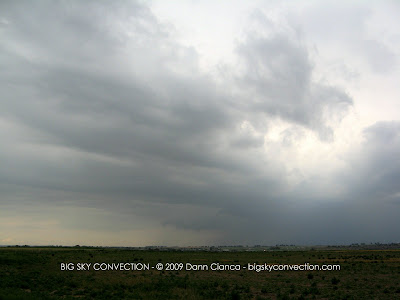 There were a few thunderstorms to drive through on the way north into Wyoming. A severe storm crossed I-25 well ahead of us at Chugwater and I was asked to investigate the hail swath on my way through by a friend at the Cheyenne National Weather Service. Brian (my cousin) and I were able to recover some 1.25" stones (which had probably melted to some extent in the 45-60 minutes since falling). The Chugwater area had some hail drifts remaining on the side of the road which extended about two miles along the highway. 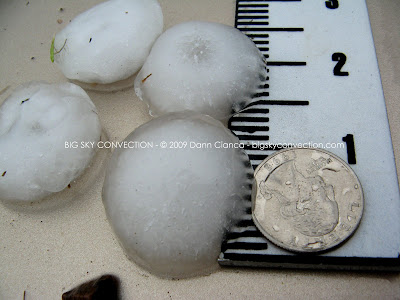 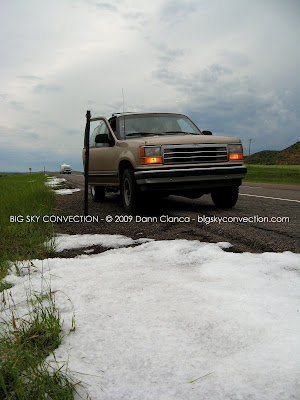 Further north, we watched some storms come off the Laramie Mountains, some occasionally showing some lowered, scuddy bases. There was a very nice storm to my our north and east in Niobara County, but I determined that it was too far out of the way to intercept while still making it into Butte at a reasonable hour. We cored a couple developing cells south of Douglass and then stopped to grab some dinner. Unfortunately, the Taco Johns there had closed and suddenly another storm had my attention. There were two lowerings that I was watching and I drove to the west side of town to observe. We met another spotter there, actually, which I thought was kind of random.

Neither storm looked all that impressive on radar but they were rather distant from the radar site. I was surprised at how low the bases were compared to what I had seen earlier along the path. I set up my tripod and shot at F8 (as high as my camera would go) to try and get lightning. As luck would have it, the one strike I got was on one of the only blurry pictures. Oh well, that's how it goes I suppose. 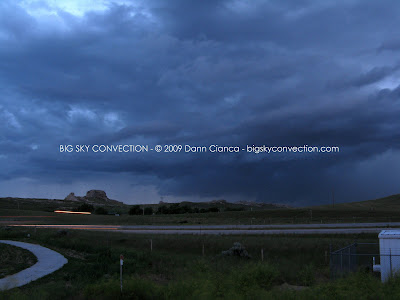 Lowering on the southern base. 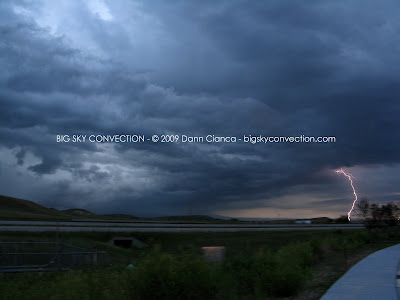 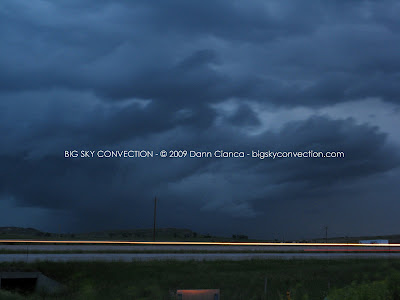 Lowering on the northern base (at times it looked like something was back in there).
When it began to rain, we packed up and left. We continued west on the interstate but looking over my shoulder, the souther base got really ... low ... again. It was too dark and wet to get out and shoot photos so I took some video of the feature, which persisted for quite a while.

We turned around to intercept but it faded. It was getting dark at this point, so I decided to continue on the trip (not actively chasing). I did spend a lot of time driving through rain, hydroplaining, and even getting a nice lightning show over the southcentral mountains of Montana in the middle of the night. It was a long, long drive and the only thing that kept me awake was the periodic adrenaline rush assosciated with the occasional deer standing in the middle of the highway.

We finally arrived in Butte, Montana at just a bit after 5AM local time ... and needless to say, it was bed time! 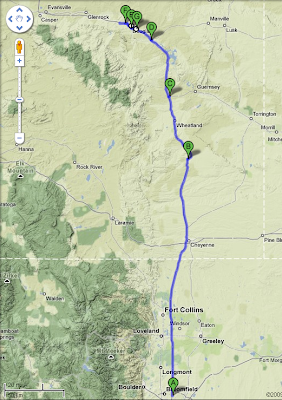 Dann
Coming soon: Pics/reports from three additional chases on the trip plus photos from the 3rd/4th of July and a trip to Lewis & Clark Caverns.
Posted by Dann Cianca at 9:50 PM