Well ... this is one of those reports you really don't want to write and probably can get away without mentioning ... but for the sake of record keeping, here we go.

Okay, so I'm relatively low on funds until the beginning of August. That's what moving will do do you apparently! Anyway, after seeing some of the great storms and hail! in Colorado on Friday, I was itching to get out. Tony Laubach was nice enough to let me come along with him. I was less enthusiastic about severe probs for the day as the models kept putting a bubble of inhibition over NE Colorado ... around the bubble, however, was ample instability. The wind fields at the surface were a bit weak but there was enough moisture to do the job.

We met at the DIA park-and-ride at 2:15 and decided to head NE to intercept a lone storm moving in from Nebraska. I was a little weary about the storm as it was moving into the model forecast inhibited environment, but it was literally the only thing in the state. We ran into Scott Hammel in Bennett and it was cool to meet him.

We convoyed up and headed north on CO 70 to Prospect Valley all the while watching the storm die. We continued east a bit on CO 52 just north of Hoyt as the storm completely collapsed. I didn't even take a picture of it.

Doing a bit of mesoanalysis, I was stunned. There was virtually no inhibition and CAPE aplenty, especially back along the Footies. Looking in that direction, however, it was just hazy with a few altocumulus clouds. We made the decision to head back toward Denver, while keeping an eye on the mountains. As we appraoched the metro area, a skinny tower went up over Larimer County, but orphaned its anvil. That was the last time anything happened in the vertical. I was home by 6PM.

I was a little perturbed when I got home ... we *SHOULD* have had storms ... both the local WFO and SPC said "supercells" coming off the mountains. Nothing. I pulled our 0Z OBSERVED sounding and it shows the answer. We see temperature inversions at 650mb and 460mb. 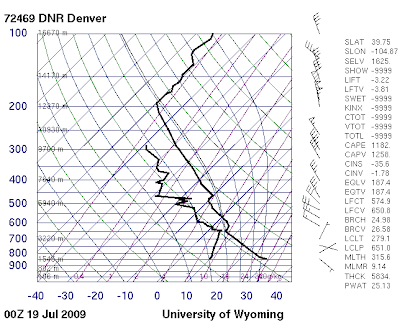 There was a good deal of heating over the mountains of Wyoming yesterday. It's common in the summer to see warming in the mid levels due to heat transport along the mountain sides. Combine that with the northwest flow (would not have been different under zonal conditions) and that warm layer moves out over the plains. Now, sometimes when the sun goes down and this warming ceases, we can get an evening initiation ... but you also have to understand that the surface inversion begins at that time as well. No luck yesterday in that manner, but at least I feel a bit more at peace knowing what happened. I guess, the models just didn't see this mid-level inversion or at least didn't note its strength. 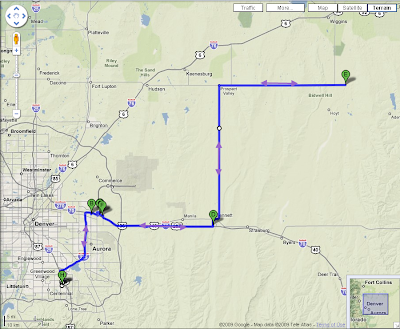 I saw that Larimer County tower on the way back and could only think, "oh come on!" Hahaha...good meeting you guys yesterday though!