I had watched a few showers roll off the Footies and die over the course of the evening. I had been looking at the RUC forecast soundings for the area, though, and noticed that we had a good deal of CAPE along the foothills and the Palmer Divide and that the cap was forecast to weaken a bit, though the local weather service had written off the chance of storms for the remainder of the evening.

Another round of storms popped up over Rocky Mountain National Park and started to turn to the southeast. As they emerged from the mountains, I activated the lightning net and received word from folks on the north side that the storms (there were three distinct cells) were not producing much lightning.

The third storm in line was the strongest and the hail algorithm was predicting 1"+ hail. I paid close attention to the VIL and Echo Tops to see if the storm was strengthening. It appeared to be low-topped to some extent but noticed that as it came off the foothills, the tops went up and it almost seemed to have a little hook on it. At that point, I hit the road.

I watched the radar as I headed north on I-225 and saw the storm began to intensify. I merged onto Peña Blvd after getting to I-70 and headed north, now very close to the storm. The lightning was frequent but more flashy than anything. The main precip echo was almost to my north at this point, but to my northwest, I saw a large area of cloud structure sticking out of the bottom of the updraft right over the Rocky Mountain Arsenal. It was hard to see as I was driving and there wasn't much if any lightning behind it, but it looked like a wall cloud.

I increased speed to get to my perch (of sorts) at Tower Road and Peña. I parked and quickly got my equipment out. I noted rotation in the cloud structure and started taking some pictures. 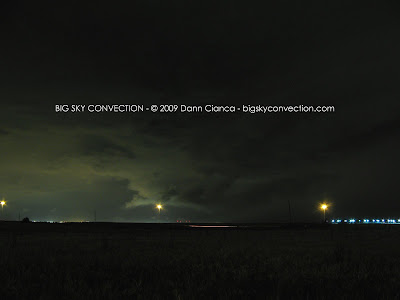 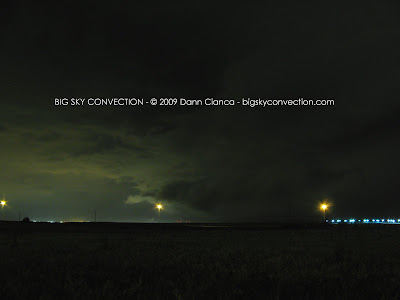 I called Tony Laubach as it approached to see if he could see any rotation on radar. He could not. While talking with him, the structure faded and a new one formed more to my north. I quickly noticed that this one was moving anticyclonically. Literally two "blocks" to my north, though the storm was moving to the southeast, I watched RAPID right-to-left motion which was moving directly toward me. I tried to take a couple pictures but it was soon on me with strong wind and HEAVY DRIZZLE. It was very odd. 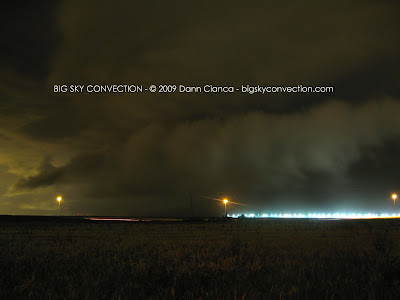 The cloud structure was moving rapidly from the right to the left of the image and then wrapping back behind the storm.

I drove south on Tower Road and got out of the precipitation. When I got to I-70, I decided to head east and keep up with it. I realized that though I had gone out for lightning, I hadn't been taking pictures of it! In fact, I recalled a couple cloud to grounds off to my northeast at my previous spot. As the storm passed over the radar site, I lost sense of its structure, but I could see some interesting structure in front of me. It looked like a shelf cloud (on side view). The CG's out ahead of it were stunning. These were some very INTENSE discharges. In fact, one repeater (as I call them ... a CG with more than just a few return strokes) hit something ... so that when the actual bolt was gone, it looked like lightning was flashing off the ground for a good while.

Finally getting a good look at the storm, it appeared to be continuing to strengthen. I really wanted some lightning, so before getting into the core, I stopped at Airpark Road and set up. Unfortunately, the heavy drizzle arrived again and made shooting difficult. I packed up again and drove through the remnants of the core, encountering a bit of hail on the highway. I stopped at Manila Road and found pea-sized hail and some minor flooding there before continuing on to Bennett.

From Bennett, I continued to shoot lightning as the storm rumbled off to the southeast. I did manage to capture a few shots worth sharing: 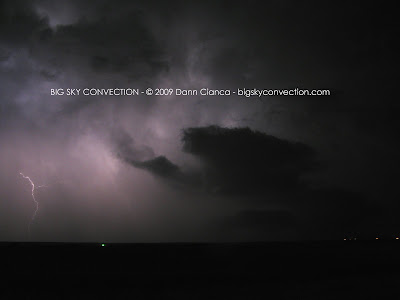 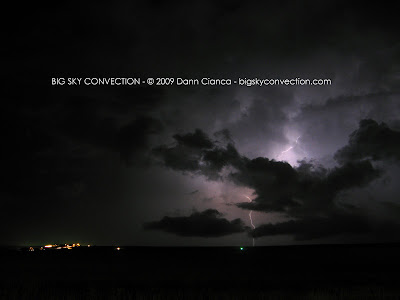 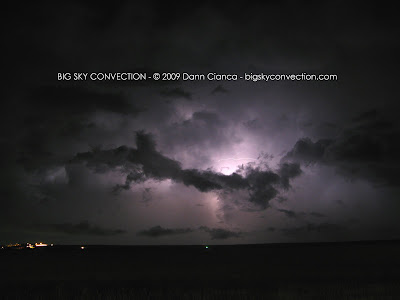 When I got home and was able to look at the radar loop, I figured out what was going on with the storm. Sitting under northwest flow, the mid level winds were pushing all the precipitation into the direction of storm motion. The surface winds were 180º from storm motion and I believe that while there was enough shear to get the storms spinning, a rear-flank (of sorts) downdraft would continually punch through the updraft as the storm cycled, separating the rotating portion of the updraft and leaving it behind. This is what I saw from my first intercept and this also appeared to happen on radar as well. Eventually, the RFD punched more to the posterior side of the storm and the rotation picked up again. I was actually very surprised that the storm was not tornado-warned after it crossed I-70. It had a nice couplet on it for over a half hour (at the lowest scans). In fact, both KFTG and TDEN were indicating TVS after TVS in the couplet.

It literally boggles my mind why this storm was not tornado-warned. Maybe the folks up there in Boulder were taking a nap or something. It was rather late at night and they dropped the thunderstorm forecast. (Crazy too, because this wasn't the only storm ... clearly, a short wave was coming through). 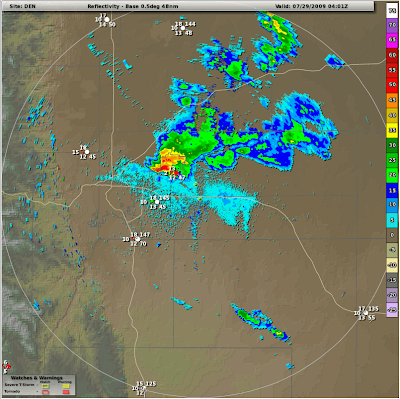 The storm at the time of my first intercept near DIA 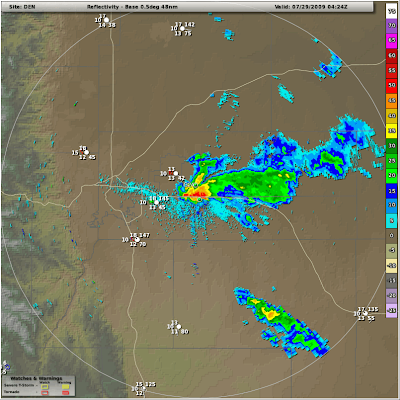 The storm as it crosses I-70 (notice the hook). 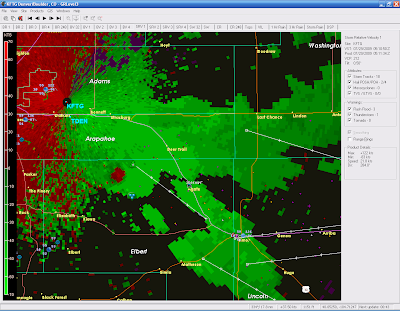 An obvious area of rotation. 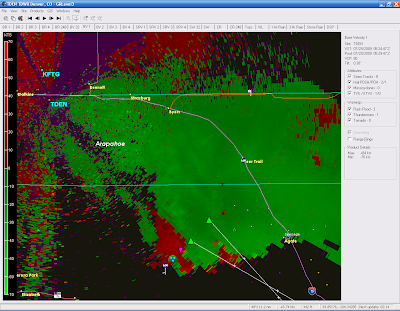 So, to recap ... a very nice surprise. Got a few lightning shots, got a few structure shots ... and the only other chaser out (as far as I know) was Jon Merage. Though I had to call it a night early (work early the next morning and insufficient funds), it was still another great chase for this amazing year. 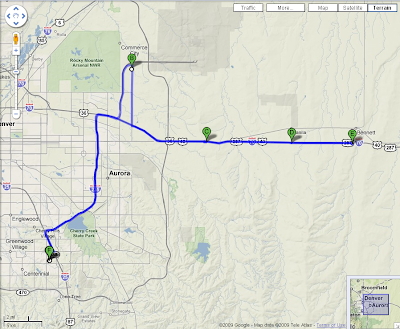 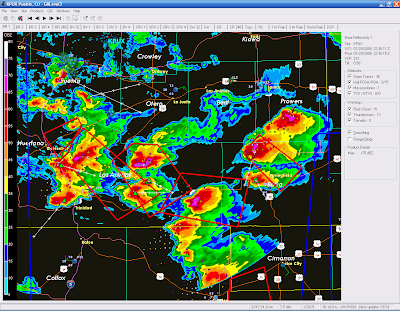 KPUX from July 29th as big hailer supercells erupt all over southeast Colorado. I don't even want to talk about the tornado machine that came to life south of Limon. I'm going to close the book on that one.
Posted by Dann Cianca at 9:52 PM

Those first two shots of lightning are money! I still don't know why any of us would ever leave I-70? Might as well just go there every day and sit and wait.