I first hiked into the East Inlet Creek Valley back in September of 2006. The hike starts with a short ascent to Adams Falls and then opens up into a beautiful, meandering riparian meadow. I had been as far as the East Meadow for the short hike in 2006, but given the proximity to the site of our family vacation and spurred by a visit to Adams Falls the day before, I had a free day to take on the journey. After being unable to coerce any of my family members to join me, I went off on my own.

I skipped Adams Falls this time around as I had been there before, bypassing the loop and continuing into the meadows above. The clouds were broken which made taking photos difficult, but I did my best. I reached the East Meadow and shot off this one below (please ignore the awful overexposed clouds ... it was necessary to capture the color and correct exposure for the foreground ... my point-and-shoot has limited capability). 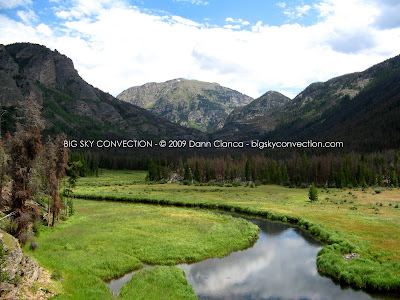 My goal for the day was to reach an unnamed "falls" further up the creek, which I would estimate to be about four miles from the trail head. I was getting rather warm as the ascent out of the meadows began. The trail veered away from the creek and climbed through the boulders on the north side of the valley. My body was having a bit of difficulty processing the low oxygen of this pressure level of the atmosphere, but I continued on. I had to be back at the lodge at 5PM, so I set a turn-around point at 2:45-3:00PM and soldiered up the mountain. I came across a few other hikers and stayed wary of moose or bear, but luckily did not encounter either.

As the afternoon was growing late, I discovered a minor waterfall on a creek coming off the south face of the ridge on the north side of the valley. I briefly wondered if this was the "falls" marked on the map, but decided that it was not, so I continued on. The path ahead began to really climb, so my progress slowed. However, I kept at it as best I could. Eventually, the trail leveled out a bit and I found myself enjoying great views of the valley floor below. I reasoned that I would take pictures "on the way" down as to give myself an opportunity to venture as far as possible.

Finally, another hiker told me that there was a nice waterfall "300 yards ahead", so I put on the afterburners (I was all but completely worn out) and finally made it to the waterfall. Honestly, it wasn't as impressive as I thought it would be, but nevertheless, I stopped and tried to photograph it. Unfortunately, most of my shots were overexposed as I was trying to get that nice "silky" look. The photo below shows the top of the falls. 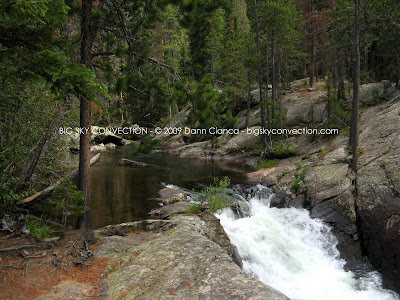 I sat and rested for a while, realizing that the one bottle of water that I had brought was about empty. Looking at my watch, I found that it was already a bit past three and necessary for me to get on going down the mountain. I had waited a bit too long for some clouds to come over the southern ridge, hoping to allow me a better chance of taking a longer exposure of the falls.

Upon standing, I found that my body was not very happy with me, but I hurried down the trail. As the clouds that I had been waiting for came over, I found that making haste suddenly was a very important idea. The clouds were very heavy with moisture and the distant echo of thunder filled the valley. Not wanting to be a lightning fatality statistic, I hurried down the trail, my knees protesting every step. I did manage so grab a picture of the valley below on one of the overlooks. Again, forgive the overexposure of the sky. (The trail head is basically at the shore of the lake in the distance). 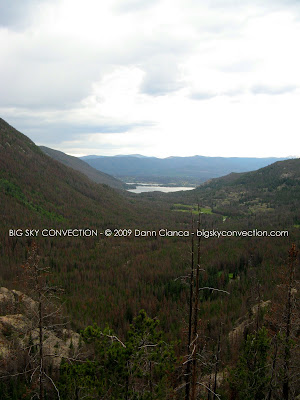 As I continued on, the thunder got closer and a very strong fetch of wind came up the valley. Looking over my head along the northern ridge, I found myself directly under the updraft of the developing storm. The rapidly rising air was condensing a few hundred yards over my head, swirling in turbulent patterns. Just then, a persistent swirl of dust ripped through the scrub and across the path on top of me, ascending the hill to my right into the updraft.

Honestly, I laughed. I realized that I had just walked through what some in the storm chasing community would add to their total as a legitimate tornado. I will refer to this as "spInflow" Anyway, it gave me a laugh when I had become a bit weary of my journey.

I took the photo below just after the above incident. 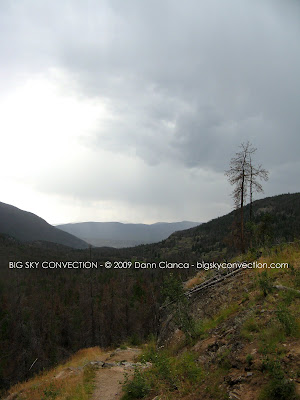 Then, it began to rain, never heavy but unrelenting. Luckily for me, though there was a bit of loud thunder, I managed to avoid any close cloud-to-ground strikes. One thing that began to bother me, however, was the valley's resident mosquito population. When I was making a good pace, they weren't such a bother, but if I stopped for even a moment, I was completely swarmed.

Unsatisfied with the photos I had taken up until this point, I stopped at that minor fall that I passed on the way up. Given that the clouds had filled the valley, I was able to take some longer exposures and was pleased with the results. 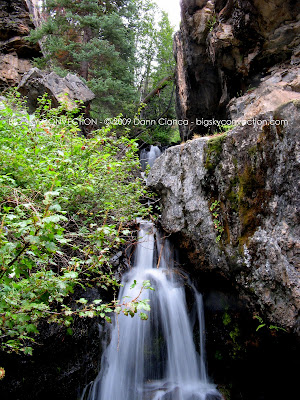 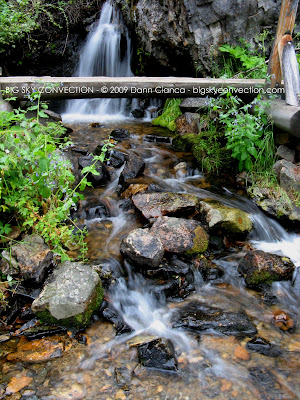 During my little photographic foray, I was absolutely covered in mosquitoes. There were times when I had more than twenty penetrating my skin at a time and my swats did nothing to lessen their numbers.

I continued with haste back into the meadows where the mosquitoes were even more dense. My body was not pleased with my place, but the irritation of the constant biting pushed me on. I could literally feel them impacting my face as I dashed in and out of the woody areas.

By the time I reached the Adams Falls loop once again, the mosquito threat had lessened, but my legs were gelatinous and almost unresponsive to my commands. I caved into the opportunity of getting to photograph Adams Falls with cloudcover, and made the short climb and then descent to a good viewing area. I kept well away from the deep chasm as my balance was less than stellar, but managed to set up for a few shots, which I believe came out well. 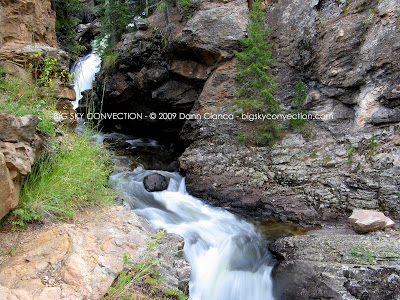 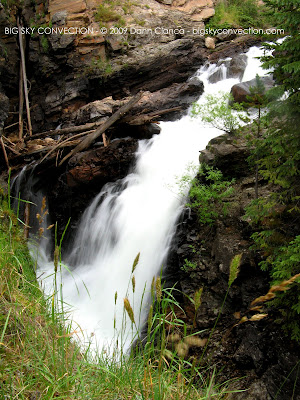 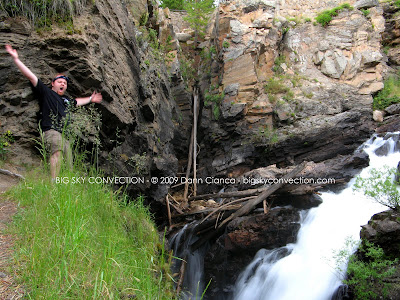 By the time I made it back to my vehicle, I was absolutely exhausted, a bit dehydrated, and down a pint of blood (thanks mosquitoes!). It had taken me much longer to come down the trail and I found that it was already rapidly approaching 5PM. I sat in the car, opened the windows, and just sat there for a moment resting. When I started backing up to leave, I heard a crunch ... realizing that I had just run over my best tripod which I had leaned against the rear hatch. I simply got out, grabbed it, and threw it in the back before driving out of there. I was so tired that I didn't really care.

I stopped just outside of Grand Lake to buy a Gatorade and a Pearson's Nut Roll which was ASTONISHINGLY delicious.

On the way back to the lodge, I pulled off the side of the road on Lake Granby to take a shot that I was waiting for "good light" for. 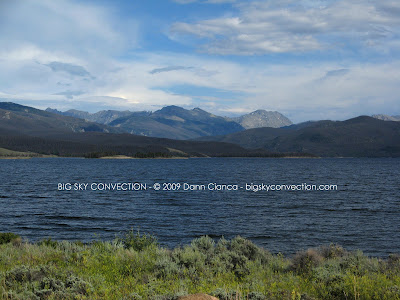 I made it back to the lodge by 5:30, ate some dinner, and then did my part to clean up and do some dishes. I was supposed to drive home that night but delayed it by a couple hours to enjoy the end-of-vacation camp fire. Though I was sore and tired, I had rehydrated myself and found a second wind. Well, a couple s'mores helped. :) 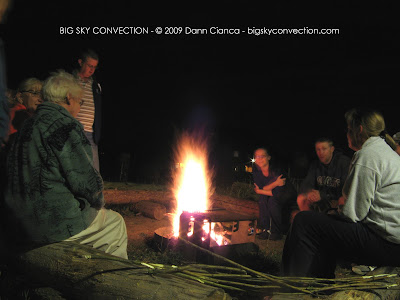 I was on the road by just after 10PM and made it back to Denver by midnight ... and let me tell ya', I fell right asleep.

The hike was intense but awesome. Unfortunately, I just don't know when to stop sometimes. I did make it 4 miles in, 4 out with 1,000ft elevation gain in three hours.

Those are awesome shots Dann. A trip out to the Big Sky state in already in the plans for next summer.

Thanks Bill! This was actually in Colorado. However, I think Montana is far more scenic than even Colorado.