The Joy And Pain Of Shooting Lightning

Without getting too much into detail about what happened tonight, let's just say I went out to shoot lightning. On my vacation this past week, I managed to run over my good tripod in the ol' Exploder. This evening, I was using my auxiliary cheapo Target tripod. Let's just say I'm a bit disappointed.

Now ... it should be said, that I randomly decided to switch my camera angle and shoot more to the south. On my first exposure, I captured this: 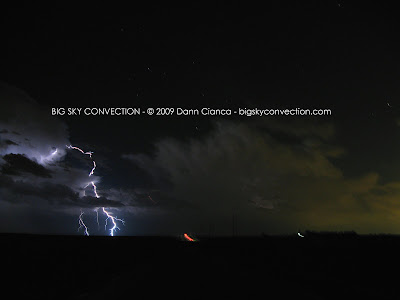 Then ... I zoomed in closely (click on image for larger view) and saw that the camera had moved during the exposure, ruining one of the best lightning bolts (a positive stroke on the back side of the tower) that I had ever captured.

When I got home, I realized many of my shots had the same "light glide" as I like to call it. I don't know why or how ... it wasn't even windy. Best I can tell, the tripod or camera mount was slowly "settling" ... possibly in response to the compression of the shutter (even with a 2 second delay).

Anyway, I guess cropping isn't out of the question ... 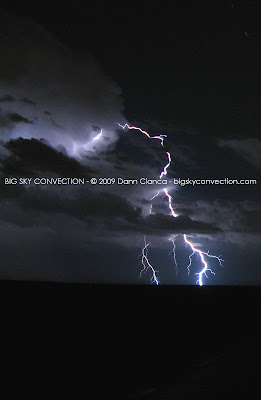 this might have to be your new main page lightning shot for Big Sky Convection huh!? amazingly sweet!

I run into the same problem sometimes when shooting lightning. It's very frustrating. That is a pretty sweet shot you got though!

You still got a good shot. This can happen even with really good gear if the ground is wet and your rig settles into the dirt. That being said, don't skimp on tripods. Let me know if you need a recommendation.

Skinbot: If it weren't bad! Bah!

VDG: Thanks man, I'll pick up a new one some time soon. I've learned out to make it okay with the one that I've got ... I just can't move it around much.