Michael and I conducted a "survey" of the Alta Vista Tornado today. It should be noted that since the tornado occurred, heavy rains had moved through the area and 9 days had passed since the touchdown.

When we arrived on the scene, we were hard-pressed to see any damage. Our first clue was twisted sheet metal along Alta Vista Road, northeast of where the barn reportedly had taken a hit. We did find the barn at the corner of Alta Vista Road and Berridge Road.

To the south of the barn, we saw a lot of debris (mostly sheet metal, plywood, and insulation) strewn about the field. In addition to that, we also found a fence that was knocked over. Upon further investigation, the fence looks to have gone down recently. The grass underneath the downed posts was very much alive and bent. Also, a large tire sat along the downed fence, the grass in similar condition underneath.

We cannot tell for certain that the tornado did this, but I speculate the tire was thrown from its original location and may have taken down the fence. (It was a heavy tire!) The fence is west of the tornado's starting point, so it would have had to "wind" westward in its track to interact with the fence. It should be noted that the fence on the other side of the road was not damaged.

I could see no evidence of shrapnel being driven into the ground or other objects; most of the debris appeared to have simply landed at the location.

We drove up to the house in front of the damaged barn to speak with the owner, but she was not home. We decided not to take any pictures while on her property, so all photos were taken while we were on the road.


Fence pole pulled from the ground.


Final survey of the area.

Click on the below image for an expanded map of the area, including tornado track, various observation positions and debris fields. 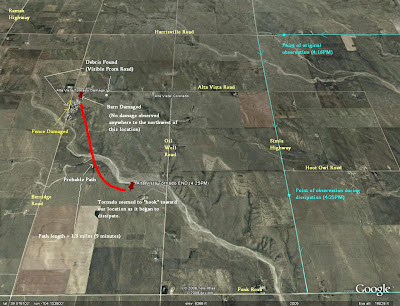