The models are doing a pretty good job at killing off the opportunity of severe weather on Friday. The NAM and GooF are in general agreement as to the placement of the upper level features, though the NAM is a tad behind with the upper level trough. Interestingly, because the upper level features are a bit behind, the surface features from the previous, northern system are ahead. So, with the NAM, we have the polar air mass based cold front 100-200 miles further south than the GFS. The GFS, which is slightly more progressive up top is initiating lee features of its own which are holding the northern cold at bay to a larger extent. The cold front will eventually sweep through the panhandles in both cases, but the timing is just a bit different.

I was hoping for a little dryline play before the cold front gets there but the models are both showing decent capping down south. In fact, almost all of the instability depicted on the NAM is significantly capped. On the GFS, a little bit of instability remains uninhibited or only slightly inhibited in NW OK, but the instability is weak there. On top of everything else, I was hoping to see the winds take on a more backing look out ahead of the cold front, which the models have also backed off on.

So, that's a downer... and not to mention the snow behind the system, in both cases, looks to be troublesome. 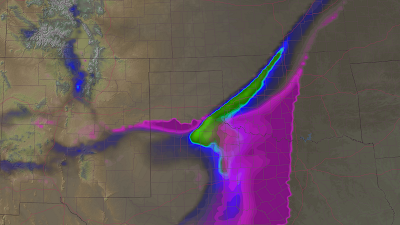 Who knows what the models will do... I've asked for the day off and know a few others might be willing to make the journey, so we'll see, but I've lost a lot of optimism tonight.