Friday, March 5th
I have been watching this shortwave (which at this point is a bit more than a shortwave) coming through in the March4-5 time period (according to the GFS/ensemble) for more than a week now. Originally, it looked as if the best energy would come out in the panhandles. Moisture looked meager at best but there was just enough instability and wind shear to get something on the low-end of severe going. Anyway, now the GFS and NAM have pretty much come into agreement on the solution of the system as it ejects. It looks like a surface low should form up in northeastern Colorado with elongated troughing on the lee side of the Rockies from Wyoming through southern Colorado. Moisture return on the NAM is a bit higher than the GFS and I still question the values, but we'll see. Both models have dryline near the Colorado-Kansas border and slowly push it eastward as the day progresses. I don't doubt that we'll see some elevated convection along the Footies and the Palmer during the afternoon but any decent, surface-based convection will center along the convergence of the dryline. Available energy may top 500J/kg and there will certainly be enough lift for storms. The shear profiles on the soupy-side support rotating updrafts, so I wouldn't be *surprised* to see a severe report or two, be that a brief tornado or some hail or maybe some wind late late as the shorty ejects. I would actually like to chase this setup (call it early-season exuberance) but I am unable to secure the necessary time off of work. I thought I might be able to squeak out at 3PM,but given the models' push to have the moisture discontinuity out in KS, I actually don't think that would give me enough time. So, I'll watch. The NAM's reflectivity parameter shows an MCS-ish conglomeration after dark, which I can see given the ejection of the (short)wave from the mountains.

If anyone is heading out and needs a bit of nowcasting, let me know. Here's a bit of a mesoscale target forecast for 5PM MST on Friday: 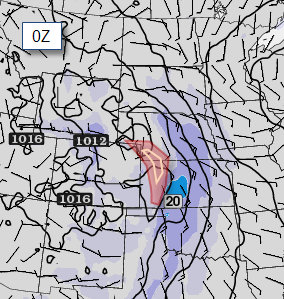 Sunday-Monday, March 7-8
The GFS and ECMWF are still not aligned on this setup, the ECMWF being a bit behind the GooF still. Can I just say that this one has been chaotic? Run to run consistency just hasn't really been there, which makes it tough too since a nice deep trough like this (with moisture ahead of it) really starts to pique interest.

Anyway, let's talk about the GFS. Synoptically, the trough starts to eject from the mountains on Sunday with 50-60kt jet creeping up the high plains. By 12Z on Monday, the closed upper level low finally appears in the OK panhandle. At this time, the trough stops digging and completely levels out, the jet into it becoming zonal. By 0Z Tuesday (Monday night), the upper low is sitting over eastern Kansas while, as the jet blasts zonally through Oklahoma.

At the surface, the LLJ kicks back in by Saturday night and starts to advect a lot of moisture up onto the high plains. As the trough emerges, a surface low forms along the Palmer Divide in Eastern Colorado. As time passes, the surface low heads southeast and is already stacked by 0Z Tuesday.

As of now, Monday looks a lot more boring than it did this morning, but Sunday holds *a little* promise (about as much or slightly more than Friday). The model resolves a bit of instability (500J/kg-ish) along the dryline from Colorado all the way down into Texas. The best instability is found in the Lamesa-Midland area at 0Z on Monday and there is equivalent wind shear (as compared to a more northern target) and better moisture.

So, 96 hours out, I've put up a comparison of what I believe to be the northern and southern targets. (Lamar, Colorado / Midland, Texas) 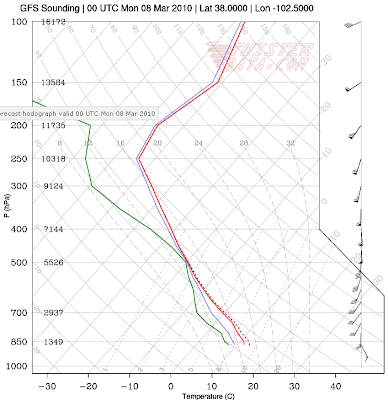 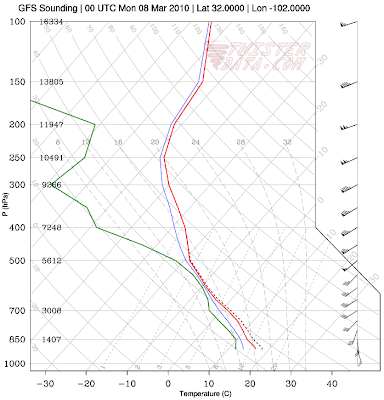 Finally, on Monday, I've really lost any hope that anything aside from a marginal cold core event will unfold. I'm sure well see some scattered sub-severe convection move through Texas into the jungle, but none of it looks all that great. There is talk about a cold core event in Kansas and that may bear watching, but with diffuse surface boundaries and the surface low south of the 500mb low, it's definitely not a *classic* setup More info on Cold Core setups

I think that will be it for tonight. I'll try and update tomorrow, especially on Friday's event and definitely expect an update on Sunday's event Friday (if not tomorrow as well.

Graphics imported from twisterdata.com
Posted by Dann Cianca at 10:39 PM

This has indeed been chaotic regarding Sunday. I still have no idea what to expect. Really nice write up on the forecast though man. Maybe see you out on Sunday sometime. I'm going somewhere regardless to test out some new equipment whether its a chase or not!