Forgive me Father... It had been sixty four days since I had chased...

Over the past couple of weeks, I have been half-fascinated by the way the NAM has, on occasion, displayed large amounts of CAPE due to enhanced surface moisture from snowmelt/evapotranspiration. By on occasion, I can refer to two. The first was a relatively calm day in zonal flow and of course, none of this potential was realized. On this occasion, however, a system was coming through. The NAM was obviously very high with surface moisture due to snow from earlier in the week, but with upper level support, my fascination lead me to go experience this in person. Though I knew it was overdone, I guess I really just wanted to see the situation in the field.

At the very least, I knew there was going to be some convection and having not been out in over two months, I just wanted to go out and hear some thunder and maybe see some hail. And who knows, nature's full of surprises. I enlisted The Great Larouche to join me and was misleading at all in my convincing of him to go. "Chase" was an awful strong word for this endeavor... but we decided to deem it "convective investigation".

We set out of the Denver area by 1:45PM and made our way south and east toward my initial target of Lamar, Colorado. The NAM actually had 50ºF dewpoints there! In reality, the dewpoints struggled to get out of the low 30's. I was obviously hoping for something more than that. Winds were out of the north to northeast throughout the trip down to Eads, Colorado, where we briefly stopped to get our pictures taken with the town's amazingly large sign which proclaims them, "home of the eagles". (See my recent Facebook postings for details)

There was convection on the south side of the Palmer Divide, as I had forecast based on the different models' output. Most of it was distant to our west however and I was a little hesitant to leave my Lamar target. We stopped as a high-based virga shower moved through. 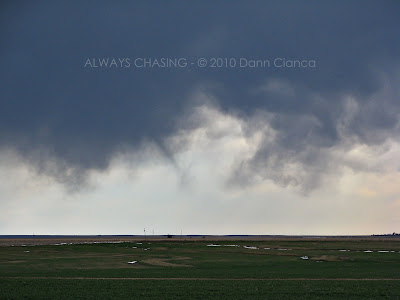 However, a bit south of Eads, I realized that a "ten" wasn't necessarily going to walk through the door, so I had a drink and decided to browse the field. Pickings were scant, but we decided to head west on dirt, a few miles south of Eads. We passed through the "shower" with barely a sprinkle and found some sunshine. Most of the convection was still a way to our south and west, so we stopped and kind of goofed around for a bit. 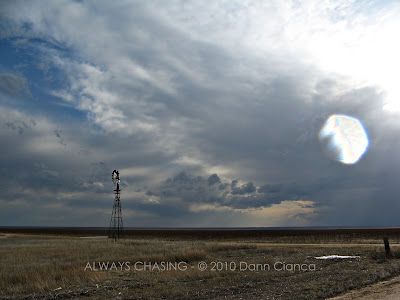 I left the water spot on the lens because I liked it. Don't hate. 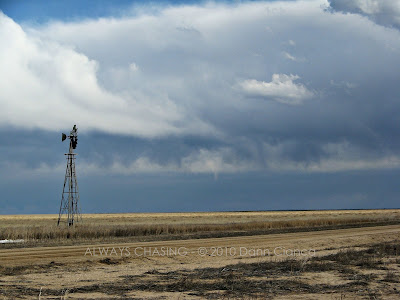 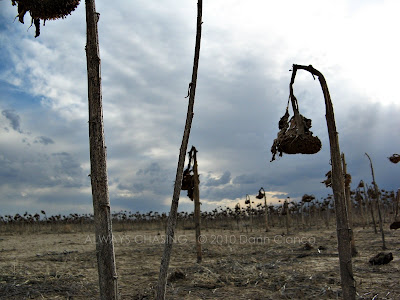 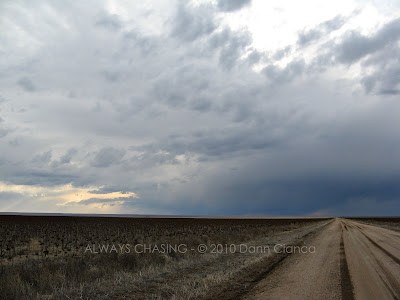 I made the mistake of laying down on the ground to get an interesting perspective and thought nothing of it as it was a field of dead sunflowers, but when I got up, I discovered about forty marble-sized burrs stuck to my arm and leg. I tried to pull them out and ended up with bloody fingertips.

Dear Grandma,
Thank you for giving me the pair of deer skin gloves for Christmas a couple years ago. While they have remained in my car and are usually used during ice scraping operations, I found them very useful this Friday as a means to successfully remove hellish spikeballs that were stuck to my clothing and attempting to drain my body of its red, iron-rich fuel.

We soon realized that the storm(s) to our southwest was looking a bit better on radar, so we decided to continue on and come up with an intercept strategy. A few miles south of Galatea, we stopped again to assess the situation and noted that the storm was looking more organized. Due to the surface wind field, I wasn't paying a lot of respect to the storm, but again, it started looking better. 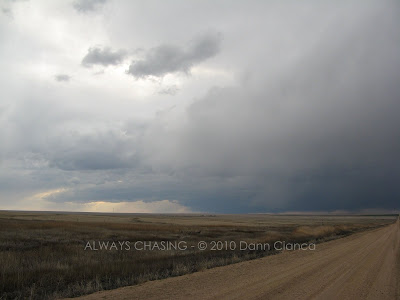 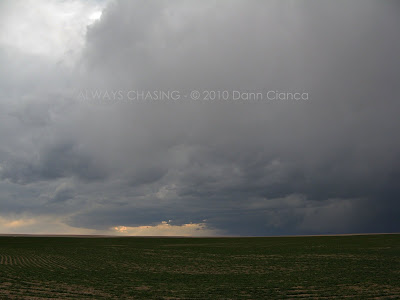 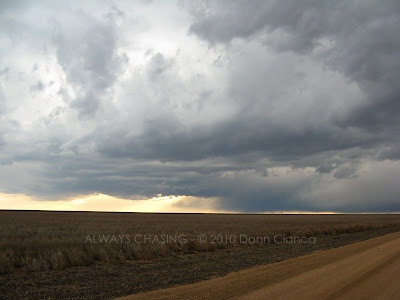 The surface winds were strong, cool and out of the northeast and while this storm may or may not have been elevated, I realized that technically, the vertical profile was conducive for rotating storms. We were also starting to see distant cloud-to-ground lightning strikes which was good. We got back on a state highway at Haswell and decided to head southwest to get underneath it. The base was intact and was crescent-shaped, which can be more easily see on some of the images above. 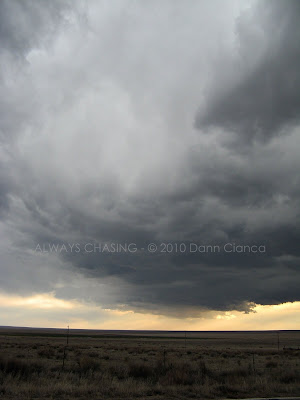 We passed in, closer to the updraft along the highway and while I was trying to make haste to catch an east-running dirt road out of Arlington, I neglected to do much in the way of photography/videography. I wish I had been more on top of things (and hopefully Kendell was) as for a period of time, the base lowered and was barrel shaped. Due to our motion, I was unable to ascertain any realistic rotation, but I would not be surprised if there was at least a weak spin. At this time, we were passing through light rain and occasional melted hail (in the form of slushballs). The lightning became more frequent as we passed close to the updraft. 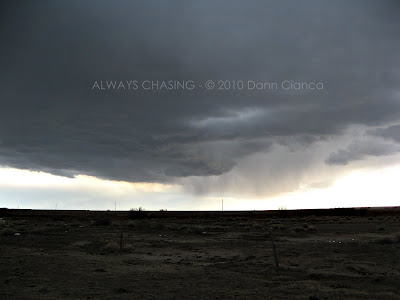 At this time, I'd like to share with you one of my favorite moments of the day.

Me: "Kendell, how far are we away from Arlington?"
K: "Just a couple miles. We have to pass through a place called 'Windmill' first."
Me: That may actually BE a windmill.

Okay, well I thought it was funny.

We headed east out of Arlington on dirt/mud and continued to get pelted with slushballs. The cloud-to-ground strikes were close and all around us, which was awesome, but we kept our eyes on the updraft immediately to our south. It didn't really do much except lower down a couple of times.

We continued east to a paved road which ran north-south between Haswell and US50. It was starting to get dark, so I wanted to get us in a good position for lightning, so we went south after taking one last look at the updraft. 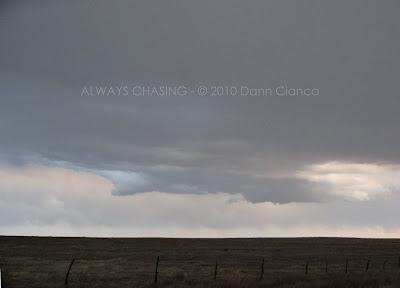 Once on US50, we continued east until we were dry (though we got into some brief pea-sized (non-slush) hail, which was nice. Once dry, we got out and tried to shoot some lightning.

I struggled to have an oppen shutter during the strikes and as a result only captured one bolt in frame (but it was tiny and behind a tree, so I'm not even going to share that image). Instead, I'll share a couple of low-light scenes of the storm as night fell. 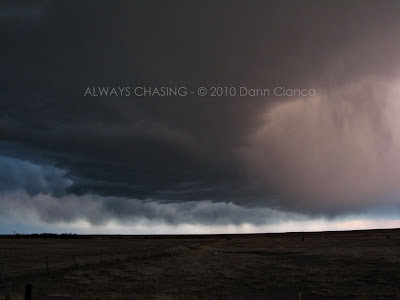 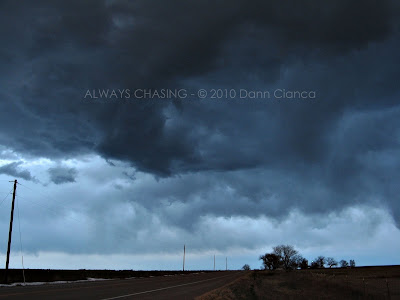 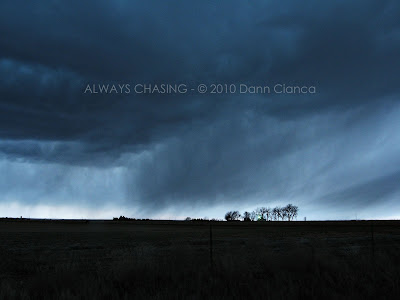 We got into the car to reposition as it had started to rain, but soon noticed that there was no more lightning... at all. So, we continued to Lamar to grab a bite to eat and get gas. I was expecting some more convection in the area after dark as the support moved through, but nothing really happened in southeast Colroado. There was a bit in Kansas, but it wasn't anything worth looking at. Aside from some last gasps of outflow from our dying storm kicking up dust in Lamar, we didn't witness anything else of a convective nature.

In fact, the expected journey home through the snow was disappointing, if you could call it that. Basically, there was no falling snow at all! In fact, only a light dusting coated the sides of I-70 between Cedar Point and Deer Trail (accompanied by a bit of fog), but the road (at least the right lane) was completely dry.

Upon arriving home and having some time to look at data, I'm pretty sure we were on the best storm of the day. I also believe that it attained brief mini-supercellular structure. That would explain what we were observing, though I would like to have a profile of the surface-to-cloudbase winds.

The radar images below are base reflectivity (0.5ºtilt) and storm relative velocity. The storm we were on is the small 35-40dBz flying-eagle shaped cell north of La Junta (57/40ob) and southeast of the large, higher-reflectivity mass near Pueblo. Click on the radars for much larger images. 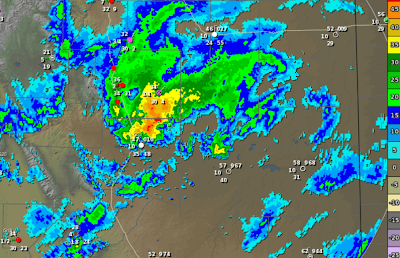 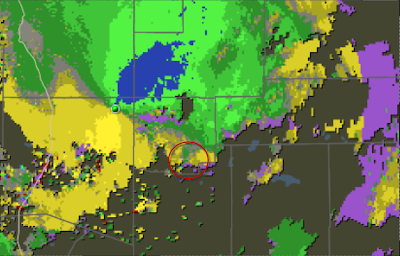 Honestly, I had a lot of fun. I really just wanted to get out under a storm and be out on the open road.

I usually post a map of my route on each individual chase. However, Google Maps will not allow me to use dirt roads in the process, which is strange because it worked fine up until this point.

Also, my new camera has decided to be incompatible with Adobe Premiere which I find of great annoyance, so no video from this chase, at least in the short term.

the last sentence made me laugh the most....because annoying things are funny to hear about....awesome post

It was fun to get out and finally chase something after a loooong winter. Can't wait for the rest of chase season.

(Eads, home of the Eagles)

Thanks guys. And Larouche... it's on like Eads Home Of The EaglesKong.

Thanks T-Lau. It's funny how my longer write-ups are for the least-interesting events. Of course, when the more interesting events unfold, they're doing so in rapid fashion... lol. I'm hoping that starts happening soon. Lol.

Good work Dann! Got to love the high plains!