While I was at work on Friday, I recall looking at the NAM and seeing a ton of CAPE over Colorado at 0Z on Tuesday (Monday night). Up top, nothing special was going on, so I was a bit confused... until I realized what it was doing. In fact, I made a nice image that I was going to use to explain it... but then forgot to send it to myself. The NAM backed off on things with later runs, so I forgot about it, until tonight. Now I'm seeing the same thing on the NAM for 0Z Wednesday (Tuesday night) 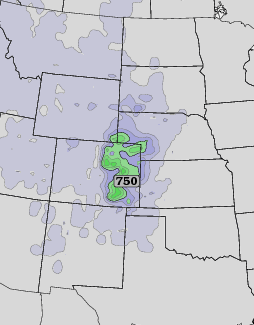 Unfortunately, it's ghost CAPE. The NAM, apparently, is completely high on evapotranspiration. The CAPE? Blame it on the snow! Take a look at the model vertical profile below (Denver at 0Z). Where's the moisture at? 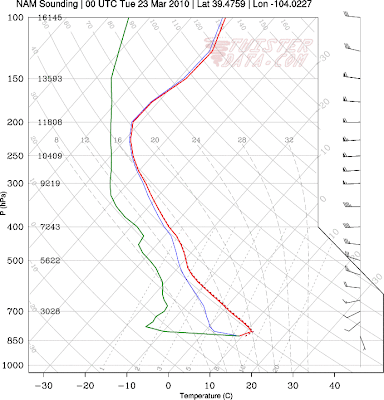 ... the surface. RIGHT at the surface and then it's high and dry! Why is there so much moisture at the surface? The answer is melting snow (which I believe the NAM is seriously overestimating.) Don't get fooled by the weak southeasterly winds a the surface, either. It's not moisture transport at work! It's a natural tendency here along the Front Range when we're in zonal flow like that. (thus the DCVZ and Denver Cyclone)

If you mix out any of that moisture at the surface... you end up with no CAPE! While the lapse rates are great, the high CAPE is calculated with high surface moisture. Notice also, that the model composite reflectivity leaves eastern Colorado rather empty. Anyway, just wanted to save someone a trip. I'm surprised no one has started freaking out on Facebook about it yet.

I guess everyone is too busy looking deep into the recesses of the 300 hour region on the GFS. :)

I dunno man, with that kind of juice something might pop out there. Hahaha, very good explanation, thanks!